Methods. A cross-sectional study was carried among a sample of Medical Professionals (MP; No. 242) during June and July 2019 as an on-line self-administered questionnaire including 21 true/false items about epidemiology, diagnosis, and clinical characteristics of leprosy. Effectors of better knowledge status (KS) and higher risk perception (RP) were assessed through calculation of respective multivariate odds ratios (OR) and 95% confidence intervals (95%CI) in two logistic regression analysis models.

Results. A total of 102 questionnaires were retrieved (participation rate 42.1%; 67.6% of respondents < 50 year-old). Of them, 10.8% had previously interacted with at least one leprosy case. Knowledge status (KS) was unsatisfying (59.7% correct answers), and also RP was relatively low, as 91.2% of them acknowledged leprosy as a severe disease, but only 42.2% identified leprosy as highly communicable. Knowledge gaps affected particularly understanding of epidemiology and non-dermatological issues. Moreover, 30.4% of respondents ignored that a treated leprosy case may remain in the community before disease eradication. The main effector of KS was having interacted with a leprosy case (OR 4.881 95%CI 1.245-36.905), while RP was negatively associated with a better KS (OR 0.094 95%CI 0.027-0.334), and working as general practitioner (OR 0.133 95%CI 0.031-0.562).

Accepted papers become the permanent property of ACTA BIO MEDICA SOCIETY OF MEDICINE AND NATURAL SCIENCES OF PARMA and no part may be reproduced, stored in a retrieval system or transmitted in any form or by any means without the prior permission of both the author and the publisher. 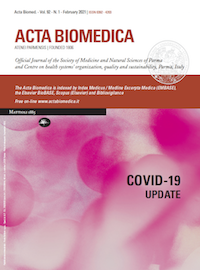